I am a member of Down the Lane …. http://www.downthelane.net/index.php …..

The Lane (as those who are regulars refer to it) is a site which also has a  forum about downshifting…the experiences of everyone who visits there is so interesting….there’s always something to learn because people have such diverse lives.

Anyhoo the reason I mentioned the Lane  is because we had a thread running called Frugal February – this is something that started last year and rolled out again this year.

The idea of Frugal February is to designate a month where we all make an effort to cut back a bit if we can or look at what we are doing and if we can do it any differently….everyone who wants to join in an writes down their experiences in a diary form………………
So it’s about sharing what you’re doing, how you are doing it, if it’s for a reason ie. saving for something or just cutting back debt and so on.
Now I think it’s good to do this along with others because as I said everyone has such diverse lives there is always something you can get from the other diaries that can be applied to your life.

So what did I do during Frugal February this year?

 I only buy seasonal and as local as possible fruit and veggies…if it was good enough for my grandma it’s good enough for me…..or frozen if it’s on offer….no difference there but it’s about keeping a watch on things.

Utilities:
We can’t change our power supplier because we’re rural we’re very limited to changing BUT we can keep looking at how we use it….so we carried on doing that….BUT…. the only thing that really mucked it up was we haven’t had rain for goodness knows how long and in order to keep the grass green we need to irrigate and in order to irrigate we need to pump the water up….the power company I’m sure have been rubbing their little company hands together with glee

Saving and making a little money:
I’ve got all of J’s clothes from when he was a baby along with all the baby stuff (you know carriers, pushchair, cot etc). So I decided it was time I looked at moving it on to someone else who could use it (and it will also clear space in wardrobes where I’ve got it all stashed!!)…Frugal February gave me the incentive to get my butt into gear and get organised. I put things onto an online auction site that runs here in NZ…They had an offer on (handy that) so I could put things on and put photo’s up for free and of course I took full advantage of that!! 40+ auctions on and so far people have bought stuff that was just sitting in the wardrobe that’s amounted to almost $200…so I’m happy with that.

On topic but something that we got regardless of Frugal Feb…..we did have a major find with regards to veggies….

went and picked up the veg (even though we don’t have any pigs now we have friends who do so we give them the fruit and we keep the greens for the cattle and sheep ..but every now and again you just wonder why things are in there……like these….

Spring onions (6 bunches of them and these are not the first we’ve had…this summer I haven’t bought any spring onions at all!!) and Corn on the cob…we threw any we didn’t think were any good to the chooks and the cows (Lily and Daisy love Corn on the cob)…we were still left with 113 cobs !!! That will last us ages…so have kept some out and 90 have been sorted and frozen….it’s around 70 cents at the moment so it would have cost us $80+ if we’d bought it!!!

These are sat in the sink to be used but all because the bag was split….

This is not the only stuff – there has been huge amounts of corn just tossed aside we are feeding to the cows and sheep and chooks.

I think I’ve said before I’ve made countless pounds of Jam from fruit that was supposedly “rubbish”….. With reports of people starving in some areas of this global village of ours….as I said… it’s great from our point of view because we have saved a fortune on fruit and veg but this is one little shop at the bottom of the world…how much more waste is there like this that if it isn’t fed to animals just gets dumped in landfill (because this is where this would go if we didn’t pick it up) . We don’t go dumpster diving (that’s not to say I wouldn’t) but it’s kind like that except we go and pick it up with their full knowledge and bring it home.

Posted in and everything else......, Manda's musings, VEGGIES...

I was looking at ways to make garden markers on the wonderful wide web…actually I was looking for ways to make them that wasn’t going to cost me anything and something I could do over winter. Want to get ready for Spring and planting …and hopefully not growing the huge amounts of thistles that we’ve managed to do this year

Now this is using tin can tops (well we’re only going to biff them in the recycling)…I have loads of either wire coat hangers or some high tensile (really thick) wire that could be used to make the stakes….the only thing I will do differently I think is use Chinagraph pencil to write on the “tags”  as can then be rubbed off again if need be….but I like them so I think they’re going to be a project for the Winter.

Instant fencing…and not quite so instant gates.

We have fenced our back garden…somewhere for the dogs to be during the day when it’s nice weather rather than being cooped up in the house all day.

We can get hold of 5 metre pallets so decided they would make the perfect fence and be easily adapted t make gates….very cheap compared to “proper fencing” and I think nice looking. Never mind the smug feeling I get when I add up how much we saved and that we are recycling stuff and putting it to use for something else.

This was so easy as it fitted perfectly …instant fence! 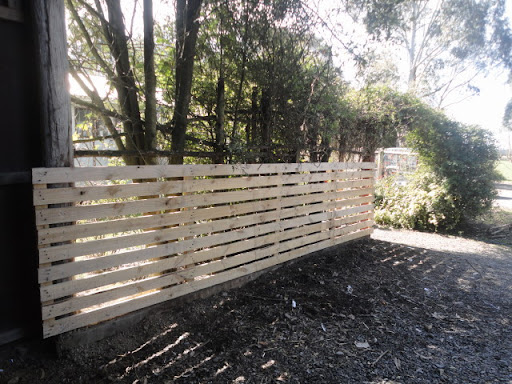 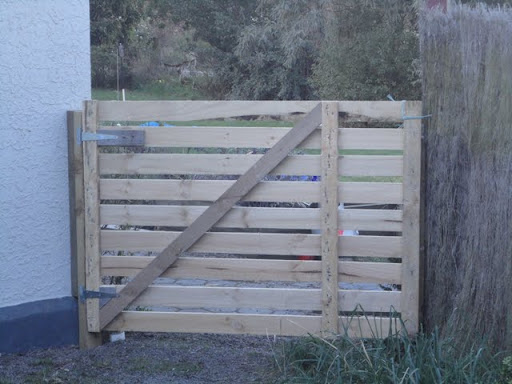 Happy with these and when they are stained I think they will be as good as.

Posted in and everything else......